Cooking Demonstrations for the Department of Health and Human Services

for the Department of Health and Human Services

It was pleasure to be able to run a series of cooking demonstrations for The Department of Health and Human Services for two years in a row. In October 2016 I (Luke) ran the first series of cooking demonstrations across five sites in Gippsland as well as Cheltenham, Frankston and Dandenong. The recipe I used was a strawberry coconut bircher muesli recipe, which is a quick and tasty brekkie with slow releasing carbohydrates, good fats and lots of magnesium and vitamin C.

In addition to the muesli, I also performed a quick and easy Thai chicken curry recipe that everyone seemed to enjoy. The feedback I received in 2017 was that people had adopted this recipe into their weekly cooking routine, which is the best result a nutritionist/chef can hear. The recipe itself is loaded with vegetables, slow releasing energy from brown rice and lean protein from chicken breast. A big focal point of the demonstrations was around finding the best curry powder to use that wasn’t packed with salt (sodium). Our recommendation is to find a curry powder with salt (sodium) as one of the last ingredients rather than one of the first, certainly not in the first 3; Hoyts curry powder is usually the best for this. The coconut milk we used was from an evaporated milk and coconut essence tin made by Nestle Carnations; it has 93% less saturated fat than coconut milk and is also high in calcium, however, it is not suitable for those with lactose intolerance, instead we would recommended lite coconut milk (200ml). 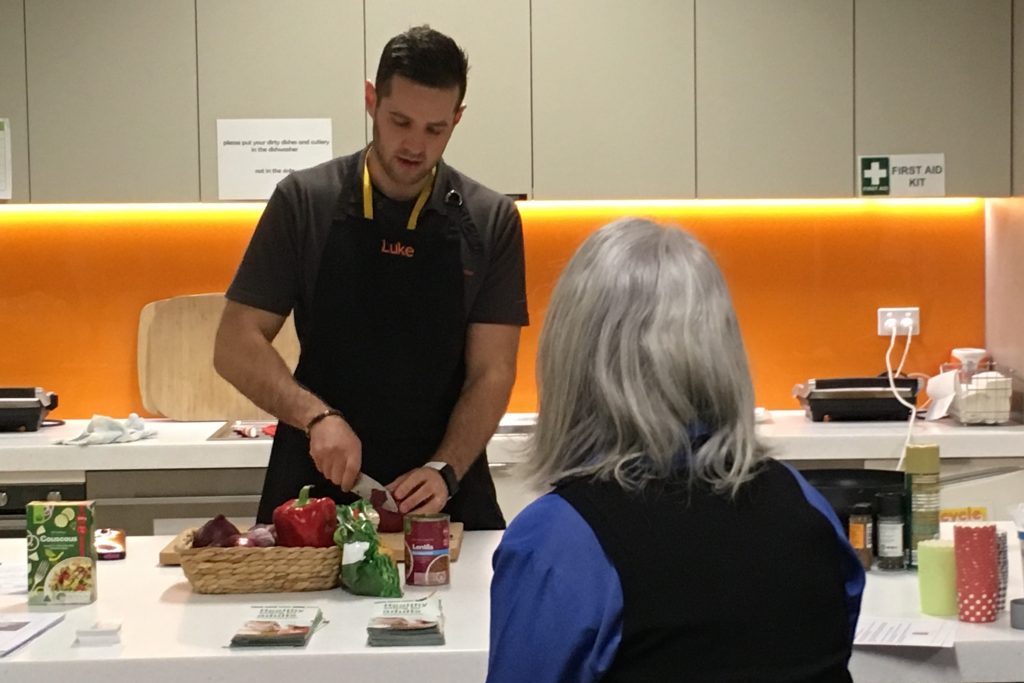 In October 2017 we ran a similar format to the 2016 cooking demonstrations, but instead we visited the Barnsdale Department of Health and Human Services site, which we didn’t do in the previous year. This year we noticed a higher attendance and we were delighted that participants came with some great questions that I have summarized in the end of the this blog post. The two recipes we used this year was a cajun chicken couscous and chocolate and banana bliss balls.  These recipes have been a new addition to our recipe options for 2017 and have been going down a treat with participants. The cajun chicken couscous is a refreshing nutrient packed lunch or dinner option. The couscous only needs boiling water for it to cook, making it a quick and easy carbohydrate source. On top I added chopped dried apricots for a sweet taste and fresh chopped mint my our garden, combined with lentils and a splash of extra virgin olive oil. On its own this meal is a perfect vegetarian dish. We also did a Cajun chicken stir you can add to couscous including chicken breast, red onion, garlic, green beans and red capsicum. The cajun spice we used was made by Hoyt and has the least amount of sodium it in when compared with Coles or Woolies or Master Chef brands.

How do I lose weight?

Answer: this question is a hard one to answer in one sentence.  The top points you need to have established in your lifestyle lead to sustainable weight loss:

Which oils are the best to cook with?

The ones we recommended as trained professionals are:

Coconut oil we know doesn’t have the same preventive health benefits that the oils above do.   Avoid using an oil with a high polyunsaturated profile i.e. linseed and sunflower oil.

Is brown rice better for you than white rice?

Absolutely! This is a no brainer. Brown rice contains more of the whole grain, which means it has a higher protein, fibre and B-Vitamin content. Protein and fibre help us to feel fuller for longer and b-vitamins help with energy metabolism in our cells, enabling us to have more energy throughout the day. In white rice a lot of the b-vitamins are lost due to the milling process and high temperatures used to process it, add this to the low fibre content and you have a high glycemic index food item that can spike insulin levels and encourage weight gain. If you are looking for the king of rice then go for wild rice, it contains an even greater source of protein, fibre and b-vitamins. In our chili con carne recipe we have used brown rice.

Are sweet potatoes better for you than white ones?

This is a difficult question as both potatoes have got great nutritional properties.  Sweet potatoes are high in beta-carotene, potassium and fibre and white potatoes have a high vitamin c and potassium content.  The biggest difference is the starch (carbohydrate content).  White potatoes do have more calories pound for pound and tend to be used more in the processed food world as crisps and chips.  We have chosen to use sweet potatoes in our healthy fish and chips recipes as we prefer the flavour and colour.

A little about us….Daley Nutrition is a community nutrition team based in Melbourne Victoria, we run a range of nutrition based programs such as cooking demonstrations in Australia to raise people’s awareness of what they are eating and empower them to change certain eating habits.  We work with not for profit organisations such as local councils, Diabetes Australia & Nutrition Australia to create a healthy eating environment for children and adults.

To find out more about our Nutrition Services below images